It’s time to get your paws on a ChipWhisperer-Husky! 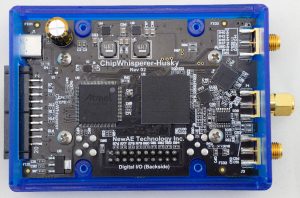 ChipWhisperer-Husky draws on NewAE Technology’s years of experience developing the popular ChipWhisperer-Lite and the lab-grade ChipWhisperer-Pro, while adding new features like high-speed logic analyzers (to visualize glitches), real-time data streaming for attacking asymmetric algorithms, support for JTAG/SWD programming with an FTDI-compatible mode, and additional I/O expansion pins. ChipWhisperer-Husky is designed to be highly accessible to researchers while maintaining NewAE Technology’s commitment to offering long-term support to all users. This means that, while the entire product is not OSHW-certified, the core—including the FPGA logic, microcontroller firmware, and computer code—is open-source, so you can make modifications and add features.

Aligning with NewAE Technology’s focus on education and spreading embedded security awareness, ChipWhisperer-Husky works with a variety of free educational resources already built and organized into self-taught “courses”. You can see examples of these courses as part of the ChipWhisperer Project.If you need more help, there is a video series on ChipWhisperer.io, and The Hardware Hacking Handbook has numerous examples that are compatible with ChipWhisperer-Husky.

Supply chain delays throughout the past two years have delayed the release (until now!) and have given the NewAE pack more time to work on the FPGA code. This means you’ll already see ChipWhisperer-Husky being used by the OpenTitan team and showing up in research papers.

Get a new leash on your hardware hacking life! ChipWhisperer-Husky “starter kits” are priced at $549 USD through Crowd Supply. Orders placed on Crowd Supply will ship in early 2023.

ChipWhisperer-Husky is designed to perform power analysis and fault injection. It benefits from numerous architecture-level decisions that give you a more stable and reliable experience compared to other off-the-shelf test gear (such as oscilloscopes and function generators). One such feature is synchronous sampling, which means the sample clock of your target device and the sample clock of ChipWhisperer-Husky can be perfectly aligned. ChipWhisperer-Husky can of course act like a normal “asynchronous” oscilloscope, instead, allowing you to specify any sample frequency within its range.

The unique design of ChipWhisperer-Husky also lets it generate various glitches, including clock glitches, which may be less than a nanosecond wide. Generating such a short pulse with a standard function generator would require a unit in the range of 1 GS/s (and an even higher analog bandwidth). Then you’d still need to write all the interface code and would struggle to achieve the level of community reproducibility that ChipWhisperer provides.

Another new feature of ChipWhisperer-Husky is a built-in logic analyzer that you can use to visualize glitches and other digital signals. 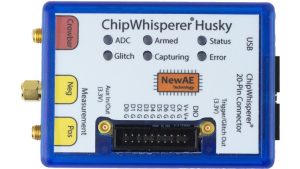 Because it was designed specifically for power analysis and fault injection, ChipWhisperer-Husky has a huge range of triggering mechanisms. These mechanisms run “on the hardware” in the FPGA and allow you to trigger on things like: 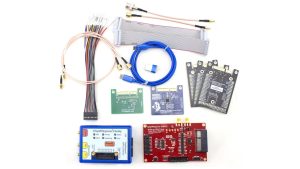 ChipWhisperer-Husky ships with two “targets” on which you can run various code, including all ChipWhisperer tutorials. The targets represent typical embedded systems you might be working with when trying to protect against these attacks, and they give you a known starting point so you don’t have to waste time getting the instrumentation setup. Instead, you can jump right into the interesting part of the work: exploring power analysis and fault injection.

The microcontroller-based target is a Microchip SAM4S2A, which has 128 KBytes of FLASH and 64 KBytes of SRAM. It is large enough to run most algorithms you throw at it, including AES, RSA, and ECC.

The other target uses the popular Lattice iCE40 FPGA. The tutorial has already been setup to run NEORV32, a soft-core RISC-V processor. This means you can use the iCE40 target as a RISC-V microcontroller target out of the box. You can also run some cryptographic cores on it—an AES core fits, for example—which allows you to perform attacks on hardware-based cryptographic implementations.

Learn more about ChipWhisperer-Husky and get campaign updates on Crowd Supply.

New in the linecard from Bürklin Elektronik: Mueller Electric, the “inventor” of the crocodile clip

Digi International and UR Group Form Strategic Relationship to Deliver Intelligent Transport Systems in the UK.

We use cookies on our website to give you the most relevant experience by remembering your preferences and repeat visits. By clicking “Accept”, you consent to the use of ALL the cookies.
Cookie settingsACCEPT
Manage consent

This website uses cookies to improve your experience while you navigate through the website. Out of these, the cookies that are categorized as necessary are stored on your browser as they are essential for the working of basic functionalities of the website. We also use third-party cookies that help us analyze and understand how you use this website. These cookies will be stored in your browser only with your consent. You also have the option to opt-out of these cookies. But opting out of some of these cookies may affect your browsing experience.
Necessary Always Enabled
Necessary cookies are absolutely essential for the website to function properly. These cookies ensure basic functionalities and security features of the website, anonymously.
Functional
Functional cookies help to perform certain functionalities like sharing the content of the website on social media platforms, collect feedbacks, and other third-party features.
Performance
Performance cookies are used to understand and analyze the key performance indexes of the website which helps in delivering a better user experience for the visitors.
Analytics
Analytical cookies are used to understand how visitors interact with the website. These cookies help provide information on metrics the number of visitors, bounce rate, traffic source, etc.
Advertisement
Advertisement cookies are used to provide visitors with relevant ads and marketing campaigns. These cookies track visitors across websites and collect information to provide customized ads.
Others
Other uncategorized cookies are those that are being analyzed and have not been classified into a category as yet.
SAVE & ACCEPT