“First GaN to be introduced for mobile phone handsets in the world”, says
Jay Son, CEO of Innoscience 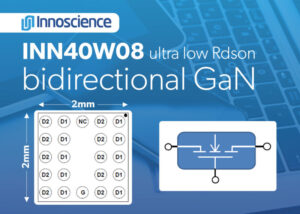 keyboard with phone and tablet pc

Commented Dr. Denis Marcon, General Manager of Innoscience Europe and Marketing Manager for the USA and Europe: “GaN technology has been adopted by manufacturers of mobile phone chargers over the last couple of years to deliver increased power and shrink device size. However, Innoscience’s significant breakthrough now makes it possible to introduce GaN HEMTs into mobile phone handsets as well, increasing efficiency and performance. With Innoscience’s huge available capacity, we provide the secure supply chain that customers nowadays expect.”

Innoscience is an Integrated Device Manufacturer (IDM) founded in December 2015 with main investment from CMBI, ARM, SK and CATL. With the development of new technologies, the electric power grid and power electronic systems across the world are undergoing a massive transformation. Our vision is to create an energy ecosystem with the most effective and low-cost Gallium-Nitride-on-Silicon (GaN-on-Si) power solutions. In November, 2017, Innoscience first established a mass production 8-inch wafer line for GaN-on-Si devices in Zhuhai. In order to fulfill the rapidly growing power demands, Innoscience has inaugurated a new facility in the Suzhou in September, 2020. As a cutting-edge GaN technology provider, Innoscience’s 1,400+ employees and over 300 R&D experts are dedicated to delivering high performance and high reliability GaN power devices that can be widely used in diverse applications including cloud computing, electric vehicles (EV) and automotive, portable devices, mobile phones, chargers and adapters. For more information, please visit http://www.innoscience.com.

We use cookies on our website to give you the most relevant experience by remembering your preferences and repeat visits. By clicking “Accept”, you consent to the use of ALL the cookies.
Cookie settingsACCEPT
Manage consent

This website uses cookies to improve your experience while you navigate through the website. Out of these, the cookies that are categorized as necessary are stored on your browser as they are essential for the working of basic functionalities of the website. We also use third-party cookies that help us analyze and understand how you use this website. These cookies will be stored in your browser only with your consent. You also have the option to opt-out of these cookies. But opting out of some of these cookies may affect your browsing experience.
Necessary Always Enabled
Necessary cookies are absolutely essential for the website to function properly. These cookies ensure basic functionalities and security features of the website, anonymously.
Functional
Functional cookies help to perform certain functionalities like sharing the content of the website on social media platforms, collect feedbacks, and other third-party features.
Performance
Performance cookies are used to understand and analyze the key performance indexes of the website which helps in delivering a better user experience for the visitors.
Analytics
Analytical cookies are used to understand how visitors interact with the website. These cookies help provide information on metrics the number of visitors, bounce rate, traffic source, etc.
Advertisement
Advertisement cookies are used to provide visitors with relevant ads and marketing campaigns. These cookies track visitors across websites and collect information to provide customized ads.
Others
Other uncategorized cookies are those that are being analyzed and have not been classified into a category as yet.
SAVE & ACCEPT